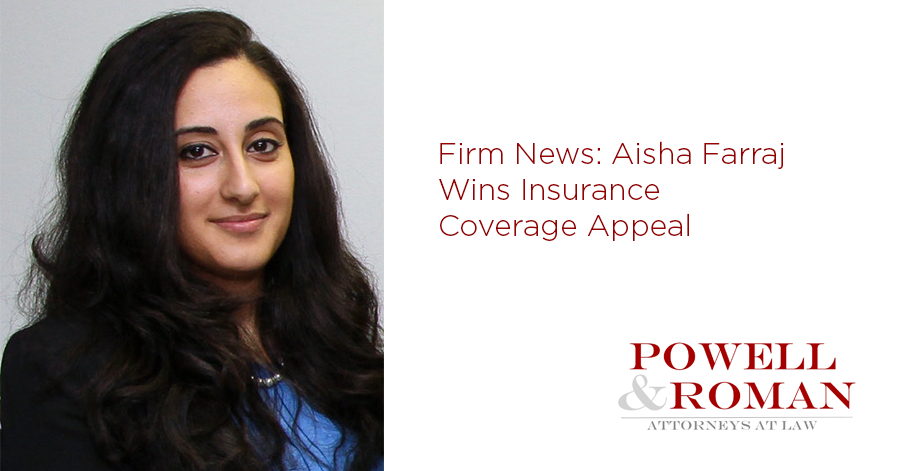 Powell & Roman, LLC associate Aisha Farraj was successful in convincing a New Jersey appellate court that a commercial vehicle policy unambiguously limited damages to the amount stated in a schedule included in the policy.

At issue was the policy?s declaration page which stated that in the event of a loss, the ?Basis of Evaluation? was ?Actual Cash Value.? The case Mark IV Transportation and Logistics, Inc. v. Great Lakes Reinsurance, involved a fleet of vehicles valued at nearly $1.5 million dollars. Mark IV filed a claim after one its vehicles?valued in the schedule at $18,000.00?was damaged in an accident. The applicable policy provision stated:

This insurance covers only such and so many of the perils named in the Schedule as are indicated by a specific premium set thereunder. The Limit of the Underwriters? Liability in respect of each of such Perils is the amount insured stated in the Schedule or the actual cash value of the vehicle concerned at the time of loss, whichever is less.

Mark IV argued that the actual cash value of the vehicle was $24,000.00, and that the insurance contract contained conflicting language creating an ambiguity as to how the vehicle should be valued for purposes of liability coverage. Specifically, Mark IV claimed that the policy was ambiguous because the declarations page stated, ?Insuring Agreement 2 ? Basis of Valuation: Actual Cash Value.? It claimed that this statement was inconsistent with the above quoted provision that limited coverage to the lessor of the amount ?stated in the Schedule or the actual cash value of the vehicle . . . at the time of loss.?

Both the trial court and the Appellate Division disagreed, finding that the relevant provisions of the policy were clear and unambiguous. The Appellate Division held that the statement in the declarations page ?does not create any ambiguity as to the coverage? outlined in the insuring agreement, but rather ?merely indicated that the valuation of any damaged vehicle would be its cash value, rather than its replacement cost.?

The case is an even bigger win for insurers than it may initially seem. While the case concerned only one of Mark IV?s vehicles, the entire fleet was valued at close to 1.5 million dollars. With such considerable potential liability, insurers should feel better knowing that they will not be liable for amounts greater than those agreed to in a vehicle schedule.